skip to main | skip to sidebar

Random Self-Indulgent Story About Me & My Dog

In the summer of 2003, before I started law school, I decided to get a dog. All my life, my family had dogs; they were always cute little furry creatures that my mom would put bandanas on and would prance around the house. These were great dogs, but I always wanted a dog more suited to me. It’s hard to feel masculine walking a Shih-Tzu down the street. So I resolved that when I finally got one of my own, I would get a dog that was quintessentially mine. This is how I came to own an English Bulldog, who I named Ike.

He was a good puppy; playful, friendly, goofy, and a total chick magnet. He never chewed up furniture or shoes, was housetrained fairly easily, and followed me everywhere I went. He was a great little dog.

Around the time that he turned six months, his bulldog personality began to really come through. He was stubborn and obstinate. He approached everything with the sort of persistent tenacity that made the breed famous. He absolutely had a mind of his own, and was never afraid to use it. If I would catch him doing something he wasn’t supposed to be doing, like chewing holes in the drywall, I would scold him and he would take it like a champ. As soon as I was done, he would go right back to doing what I had just interrupted.

When it comes to stubborn, obstinate, anti-authoritarian, persistent personalities, Ike met had his match. He would have walked all over a weaker person, but not me. When I tried to make him do something that he didn’t want to do, he would sit down, ears back, eyes wide open, and stare straight up at me, defying me to make him do it. When he did, I had no problem waiting him out. If he didn’t want to pee in the rain, I would drag him to the middle of the yard and stand there looking at him until he was done struggling to try and get inside, and finally relented. If he didn’t want his ears cleaned, we’d have a Clash-of-the-Titans style wrestling match until he finally gave up and let me do it. And I loved every minute of it. 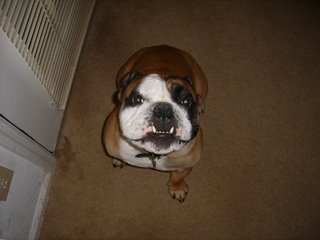 When he wasn’t quite a year old yet, I left him with my parents for the weekend, and needless to say, he did not behave himself. When I got home I was told all of his misdeeds. “He wouldn’t leave Oscar and Mazey (their spoiled rotten Shih-Tzus) alone,” my mom told me. “He wouldn’t lie down and rest, he just was relentless in trying to get them to play. He is noisy, and just ran around all day and night. And when I tried to tell him what to do, he just sat there and looked at me like there was no way in hell he was going into his cage.”

“It’s one thing if you can handle him, but we can’t. Why don’t you take him to obedience school?” This seemed like a good idea. He behaved with me, but not with others, and if I wanted people to dogsit for me, he would need to learn to calm down and listen. Although I loved his stubbornness and independent spirit, I knew it was probably a smart thing to do. I researched obedience schools in the area, and learned that a top dog trainer was around here. I called and made an appointment for a free consultation. I liked the guy, and he said Ike would do better in one-on-one sessions. “Bulldogs are notoriously difficult to train. They take lots of work, but I can do it.”

“Don’t be so sure,” I told him. “He’s a stubborn little guy.” I decided to schedule three sessions for $100. “You might need more than that,” he said. I told him that if he was doing well, I’d schedule more sessions, but if it was apparent that it wasn’t going to work out, then I didn’t want to be out more non-refundable money.

We arrived for our first session, which was held in a big warehouse-like room. The first thing the instructor wanted to go over was the ‘sit’ command. Ike was a master sitter. I had been working on his sitting since he was a puppy, and it showed. He sat perfectly every time for the instructor. “This guy might be easier than I thought,” he told me. “Don’t count on it,” I said. Since Ike sat so well, he decided to move onto the ‘stay’ and ‘come’ command. He took out a treat, showed it to Ike, and told him to sit. Ike did. Then he said ‘Stay!’, and backed away, about 30 feet. He stopped, and called out, ‘Ike…Come!’ Ike barreled across the room, and received his treat. The trainer looked at me slyly, as if to say, “I told you so.”

He took out another treat, showed it to Ike, instructed him to sit and stay, backed away, stopped and called Ike again. Ike ran across the room, and got his treat. “I don’t know what you meant when you said he was stubborn. He’s a star!” the trainer exclaimed, clearly enamored with his own abilities. And I had to admit, I was impressed too. Had I been doing something wrong? Was Ike easily controllable all along, only I wasn’t fit for the task? Just as I thought this, the trainer again told Ike to sit and stay, and backed across the room. He called Ike to come, and Ike bolted in his direction. But halfway across the room, Ike suddenly put on the brakes, skidding on the concrete floor, and ended up in a sitting position, his head held high, ears pinned back, eyes wide, with a look on his face that said, “I know you are trying to train me, pal, and I don’t appreciate it.”

The trainer was baffled, and tried to get Ike to work with him, but Ike flat out refused. No amount of treats could entice him into cooperating. After 45 minutes of the one-hour session, the trainer quit trying, and said, “He’s a tough one. I suggest that you enroll him in our academy. I’ll take him for three weeks, work hard, and when you pick him up, he’ll be a changed dog. The cost is $2000.” I declined, and not just because of the price. When I watched Ike skid across the floor and defy the trainer, I decided that I liked him just the way he was.

Postscript: Ike’s puppy behavior was quite typical of bulldogs, I learned. They continue to act like puppies for two years. Eventually, he mellowed out and now spends most of his day sleeping and chewing giant rawhide bones. He still loves to play; some neighbors have puppies that he romps with until he tires out and decides to plop down. As gentle as he is with these dogs one-fifth his size, he is just as protective of them. Recently, when a strange dog lunged at one of his puppy friends, Ike went from docile and jovial to full on ready-to-attack mode, showing a ferocity that I had never seen before, ready to throw down with a large aggressive dog that got too close to his puppies. As for Ike and me, we still butt heads over things such as who gets the good spot on the couch and how far we are going to walk, and I still win. When I said I wanted a dog that was more suited to me, he was exactly what I meant. 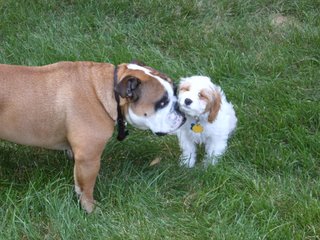 Ike, with a puppy friend
Posted by mike at 9:32 AM